Kamala is planted in Asia versus China 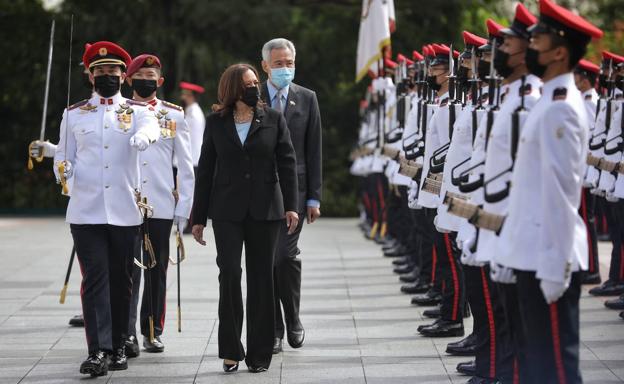 In her second official trip abroad since becoming the first female vice president of the United States in January, Kamala Harris carries on her shoulders the mission of strengthening her country’s influence in Asia, at a time when the ghosts of Vietnam and Afghanistan thunder over the fall of the American empire.

Perhaps that is why Harris will not land today in the old Saigon, baptized as Ho Chi Minh after the humiliating withdrawal from the United States in 1975, so often evoked in recent weeks. Air Force Two will land in Hanoi, where it will try to conjure up the ghosts of the past and the threats of the future. His boss is convinced that the debacle that the world sees on television will pass and in the panoramic photo of history, he will be praised for having made the difficult decisions to face the real threats of his time. In light of events, Harris’s mission is more important than ever and, consequently, the responsibility of his journey, planned long before his government saw the fall of Afghanistan coming.

In fact, if there was any date on the calendar that would place her today, it was the Paralympic Games in Tokyo, where her husband and second gentleman accompanied the US delegation on Monday. Unlike the role traditionally assigned to first and second ladies, the 56-year-old attorney Douglas Emhoff will not wear flower crowns or visit schools but instead will sit with Prime Minister Yoshihide Suga, who already hosted the first lady, Jill Biden, during the opening of the Olympics.

Thus, he leaves the background work to his wife, who has begun the visit in Singapore, the country that opens its naval bases to the United States. It does so without permanent character because it spins very fine in its attempt to maintain a certain appearance of neutrality with China. The Asian giant has ridiculed how much the evacuation fiasco in Afghanistan has been able to do and has used in its propaganda to countries in the region what happens to those who entrust their fate to the Americans. Faced with the growing power of China, some of these countries yearn for a greater presence from Washington to serve as a counterweight to the expansionist power.

They are those with whom the United States “shares the vision of a free and shared Indo-Pacific region,” Harris said upon arriving in Singapore, in an appearance with Prime Minister Lee Hsien. “The reason I am here is that the United States is a global leader and we take that role very seriously,” he stressed. To highlight this, he visited the destroyer USS Tulsa at the Changi naval base on Monday, where he reiterated his country’s commitment to regional security and appealed for a China Sea that adheres “to international rules and freedom of navigation.”

His promises of collaboration in the fight against climate change and technological agreements for the security of cyberspace had to be accompanied by substance, if he wanted to alleviate the damage caused by the abrupt exit from the Asia Pacific trade pact announced by the previous president, Donald Trump. . China imposes its 5G technology, with Huawei in the lead, through the digital silk highway, but the United States believes it can win the hand in ‘vaccine diplomacy’, since its have proven more effective.

The previous donation of 23 million doses and the opening of a delegation of the Center for Infectious Diseases Control (CDC) in Hanoi have brightened his visit and facilitated the landing of a trip on which there are even more eyes than in Guatemala, a tour that made its debut in the middle of the border crisis. The former senator is hardened by forced steps in foreign policy and Asia receives her expectantly.