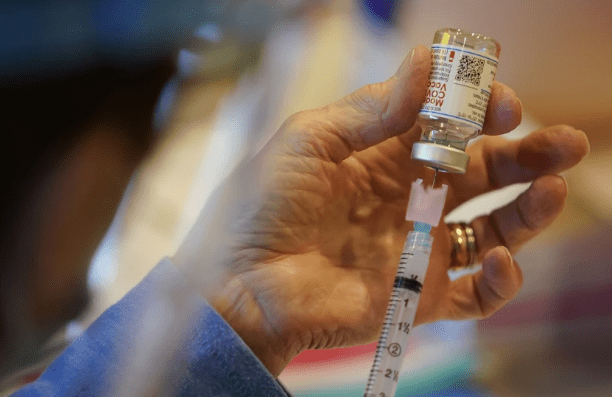 A Chester County, Pennsylvania Department of Health worker filling a syringe with Moderna’s COVID-19 vaccine at the Chester County Government Services Center in West Chester, Pennsylvania.
(ASSOCIATED PRESS)
CAMBRIDGE, Massachusetts — Regulators in the United States are delaying their decision on the application of Moderna’s vaccine against COVID-19 in children aged 12 to 17 years while they study an unusual risk of cardiac inflammation that it can cause, the pharmaceutical company reported.

The US Food and Drug Administration (FDA) told the company that its review could take until January, Moderna said.

The company also indicated that it will delay the submission of an application for authorization for emergency use of a lower dose of the vaccine for children 6 to 11 years old.

Inflammation of the heart is an extremely rare risk in both Moderna’s and Pfizer’s vaccines, and is seen most often in young men and boys.

It is difficult to detect the problem in clinical trials. And public health authorities have repeatedly stressed that COVID-19 itself can cause inflammation at a higher incidence than rare cases caused by the vaccine.

In the United States, Moderna’s vaccine is licensed for use in those 18 years of age and older.

Moderna pointed out that more than 1.5 million adolescents worldwide have received the vaccine and that the number of reports of heart inflammation “does not suggest an increased risk” for those under 18 years of age.

In the United States, children ages 12 to 17 can receive the vaccine produced by Pfizer and its partner BioNTech.

The FDA took action last week to allow the use of Pfizer’s vaccine in children ages 5 to 11. The US Centers for Disease Control and Prevention (CDC) will debate the issue this week.

Moderna has also been testing two injections, one month apart, for children ages 6 to 11, with half the dose for adults.

Risks Of Dying From Covid-19 Increases In Unvaccinated People