Coronavirus in the United States: The record of hospitalizations that has made Florida once again the epicenter of the pandemic in the country 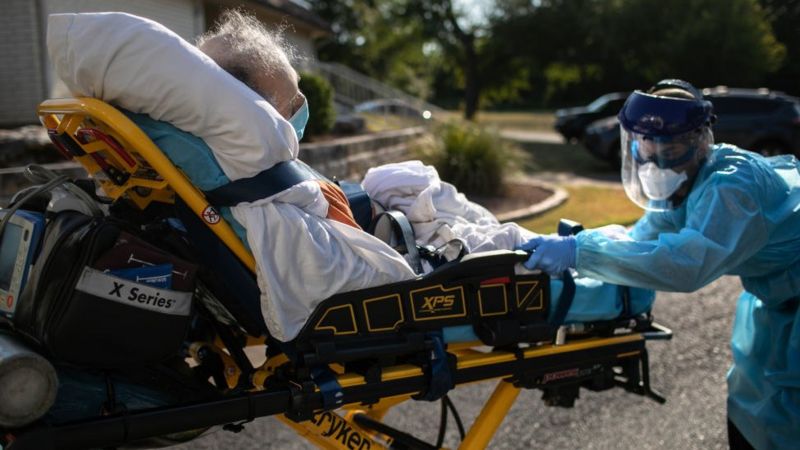 A year later, Florida is again the epicenter of the covid-19 pandemic in the United States.

Florida has registered a fifth of all new cases in the US in the last week and has broken its own records for previous waves.

Just last Saturday, the state reported 21. 683 new infections, the highest number in the state in one day, while the number of hospitalizations also broke a record this Friday, for the third day in a row, with 1 3 . 427 admitted, according to data from the Department of Health and Human Services (HHS).

With this figure, hospitalizations in Florida represent 23% of those reported nationwide.

additionally, more children are hospitalized with the virus in Florida than in any other US state.

“We have more covid patients in our hospital with this increase than with the original outbreak,” an official at a hospital in Tallahassee, the state capital, told NBC News.

Florida has recorded more than 39,000 deaths since the coronavirus pandemic began, according to figures from Johns Hopkins University.

However, the state experienced, like the rest of the United States, a notable decrease in infections and deaths as vaccination increased in previous months.

So how did you get to this new critical situation?

As is often the case in summers, Florida beaches were once again crowded with tourists and airlines reported flights to their main destinations, either Orlando or Miami, at levels similar – and even higher – than 2019, before the pandemic began.

Restaurants, cinemas, shopping centers, and supermarkets stopped making the use of masks mandatory.

However, this near-normal life occurred as the Delta variant spread across the country and Florida became dominant.

“The Delta variant is more contagious than the original Alpha variant. Vaccinated people can become infected and transmit the Delta variant. However, people who have been vaccinated are much less likely to contract a serious illness, be hospitalized, or die,” he said. Dr. José Szapocznik, professor of Public Health at the University of Miami, tells BBC Mundo.

But although the vaccine is freely administered in hundreds of places throughout the state, a portion of Florida’s population, including some at-risk groups, has refused to receive it.

According to official data, less than 60% of the local population is vaccinated, which means that about 9 million people in the state have not yet received a dose.

“The main problem in Florida is that not enough people in high-risk groups were vaccinated,” Amesh Adalja, principal investigator of the Center for Health Security at the Bloomberg School of Public Health at Johns Hopkins University, tells BBC Mundo.

According to the academic, there was no doubt that the state would experience an increase in cases with the new variant, but the most worrying thing, which is hospitalizations, is due to “high risk” people of younger ages who were not vaccinated.

Although the number of vaccinated elderly in the state is higher than in other places, it is not so for younger people who have some type of disease that make them more vulnerable to the coronavirus.

According to data from the Florida Hospital Association (FHA), less than 3% of current hospitalizations are from seniors or residents of nursing homes.

“Current hospitalizations and growth rate continues to be extremely worrying. But vaccines work!” Mary C. Mayhew, president, and CEO of the FHA said in a statement.

The clinical director of the AdventHealth Central Florida medical center, Neil Finkler, told the US media that none of his patients thought that, because they were healthy, they would contract the virus.

“The Delta variant has proven to be so contagious that even the young and healthy, including pregnant patients, are beginning to fill our hospitals,” he said.

According to Adalja, another element behind the current outbreak in Florida is that vaccination levels and previous infections of people in the state were not able to create robust herd immunity.

“Apparently, there was not enough prior immunity to prevent the virus from reaching high-risk non-immune people,” he says.

According to several studies, the immunity of people who have become ill with coronavirus ranges between six months and a year, so most of those who were infected in the summer of 2020 during the previous outbreak in Florida could now be back at risk if they are not vaccinated.

Last week, one in three cases of all those reported in the US occurred in just two states, Florida and Texas, according to the White House covid-19 response coordinator Jeff Zients.

According to the official, the cases are mainly in areas where vaccination rates remain low.

State data indicates in that sense that while some parts of Florida are experiencing hospitalizations that exceed those of last summer, in other areas where vaccination rates are high, hospitalizations are below that reported last July.

However, Szapocznik believes that another element to take into account with the new, more contagious variant is that vaccination alone is not enough, since the virus can be transmitted by those vaccinated.

“We must all wear masks and comply with physical distancing. And states must launch testing, monitoring, and isolation programs before a worse variant emerges,” he says.

“Every state, including Florida, should launch a big vaccination initiative that specifically targets people who are skeptical of vaccines. Our state leaders should use their intimidating pulpit to ‘preach’ vaccination because no one is safe until we are all safe, “he adds.

Currently, more than 70% of Americans have received at least one dose of the vaccine, a milestone that President Joe Biden hoped to reach before the July 4 holiday.

More than 99.99% of people fully vaccinated against Covid-19 have not had a major infection that has resulted in hospitalization or death, according to the latest data from the Centers for Disease Control (CDC, for its acronym in English). ).

The rapid increase in hospitalizations and cases has prompted officials in some cities and counties, such as Miami-Dade and Orlando, to issue new orders to require masks indoors.

And, also, some businesses, amusement parks, and federal government agencies have begun requiring their employees to get vaccinated.

However, the main opposition to tougher measures to alleviate the current situation has come from the state governor, Ron DeSantis, who has consistently opposed the use of masks and quarantines.

The Republican signed a law last May that invalidated local government orders to fight the coronavirus and gave him the power to override future ones.

Despite calls to declare an emergency in the state, the governor promised that he would not reestablish any of the restrictions, considering that they “did not work” on previous occasions.

Last week, DeSantis questioned new federal guidelines recommending the use of masks even for vaccinated people and threatened to withdraw grants to schools that require them from their students.

“I think it is very important that we say unequivocally: no to school closings, no restrictions, no mandates, ‘” he said to ovations at a press conference.

DeSantis added that Florida “would choose freedom over Fascism” (referring to Anthony Fauci, the nation’s leading infectious disease expert who again recommended the use of masks).

While this is happening in Florida, in other places, like New York, proof of vaccination will be required for people who attend restaurants, gyms, and other businesses.

According to Adalja, the response to the Florida situation and “all the problems that the United States faces” with the coronavirus is greater vaccination, especially for high-risk people.

“Other than that, unvaccinated people need to be very cautious about where they interact socially,” he says.