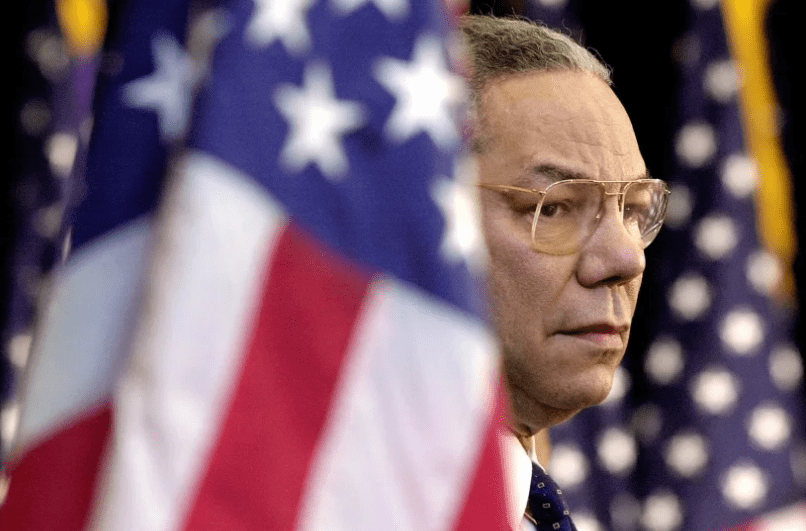 Colin Powell, the US Secretary of State, watches as President Bush delivers a speech at the State Department in Washington on February 15, 2001. Powell died of complications from COVID-19, his family said!
WASHINGTON – Colin Powell, who worked with Democratic and Republican US presidents on war and peace but whose fine reputation forever deteriorated when he appeared before the United Nations and made incorrect claims to justify the US war in Iraq, died Monday of complications. by COVID-19. He was 84 years old.

Powell, a veteran of the Vietnam War, rose to the rank of four-star general and in 1989 became the first black person to chair the Joint Chiefs of Staff. In that role, he oversaw the U.S. invasion of Panama and later Kuwait to drive out the Iraqi army in 1991.

But his legacy was ruined when, in 2003, he appeared before the UN Security Council in his role as secretary of state and defended the US war against Iraq at a time of enormous international skepticism. He cited misinformation that former Iraqi President Saddam Hussein had hidden weapons of mass destruction. Baghdad’s claims that they did not have such weapons represent a “web of lies,” Powell told the body at the time.

In announcing Powell’s death on social media, his family said he was fully vaccinated against the coronavirus.

“We have lost an extraordinary and loving husband, father and grandfather, and a great American,” the family said. Powell was being treated at Walter Reed National Medical Center in Bethesda, Maryland.

Peggy Cifrino, a longtime assistant to Powell, ‘said the former official had been treated for multiple myeloma, a blood cancer, for the past several years. Powell’s family’s post on social media did not indicate if Powell had any pre-existing illnesses.

Multiple myeloma affects the body’s ability to fight infection, and studies have shown that these cancer patients do not get as much protection from COVID-19 vaccines as people without the disease.

Powell was the first American official to publicly blame Osama bin Laden’s al Qaeda network for the terrorist attacks of September 11, 2001, and took a whirlwind trip to Pakistan in October of that same year to demand then-Pakistani President Pervez Musharraf. to cooperate with the United States in operations against the group established in Afghanistan, which also had a presence in Pakistan – where bin Laden was later killed.

Former President George W. Bush said Monday that he and his wife Laura Bush were “deeply saddened” by Powell’s death.

“He was a great public servant” and “widely respected at home and abroad,” Bush said. “And most importantly, Colin was a family man and a friend. Laura and I send Alma and her children our condolences as they remember the life of a great man ”.

Defense Secretary Lloyd Austin, a retired US Army general, said the news of Powell’s death left “a hole in my heart.”

Risks Of Dying From Covid-19 Increases In Unvaccinated People