Yolanda, Gigi Hadid’s Mother, Claims That Zayn Malik Beat Her; He Denies It!

Did Zayn Malik hit Yolanda Hadid, Gigi, and Bella’s mom? Here’s what the 57-year-old former model and TV personality have pointed out.

And it is that it was leaked that the mother of the models Gigi and Bella Hadid accused that her daughter’s boyfriend, the former One Direction, Zayn Malik, would have beaten her sometime last week.

The report was released by TMZ and it states that Yolanda was beaten when she visited Zayn and Gigi’s home while their daughter was not present .

According to TMZ, the former television personality is even seriously considering filing a police report, although there is no record as of yet that he did so.

In this regard, Zayn Malik responded to TMZ and denied the accusations of having beaten Yolanda Hadid, the grandmother of his daughter, in addition, he said that he hoped to resolve this matter in private.

Zayn would have asked that the matter be handled in the private sphere of the family and regretted that the information was already in the hands of the press.

So far, through social networks, neither Gigi, Bella, or Yolanda herself have spoken about it, although Yolanda has kept her word that she was beaten by the British singer, TMZ assured.

Gigi Hadid and Zayn have a 1-year-old daughter, and according to the entertainment tabloid, there are no prior records of conflicts between Zayn and Yolanda.

Full of ups and downs, Gigi and Zayn have been in a relationship for about 6 years, since they began their romance in 2015. 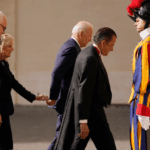 Next Article This is why it is so important for Biden to meet with the Pope.

Kabul police said that half of Kabul has been attacked by rockets in the morning. According to the police, this rocket has been fired from […]

US President Donald Trump has said that his lawyer Rudy Giuliani has been infected with the Coronavirus. In the US, the cases of Kovid-19 are […]

Controversy returns in the US over the arrest of a black teenager: “I can’t breathe”

After the controversy over the death of the African American George Floyd in Minnesota under pressure from a police officer, in the United States all police interventions are looked […]

The Oklahoma parliament adopted a law on Thursday, May 19, prohibiting all abortions upon fertilization, making this conservative bastion in the southern United States the […]