Vicente Torres brings his passion for mechanics to Chicago 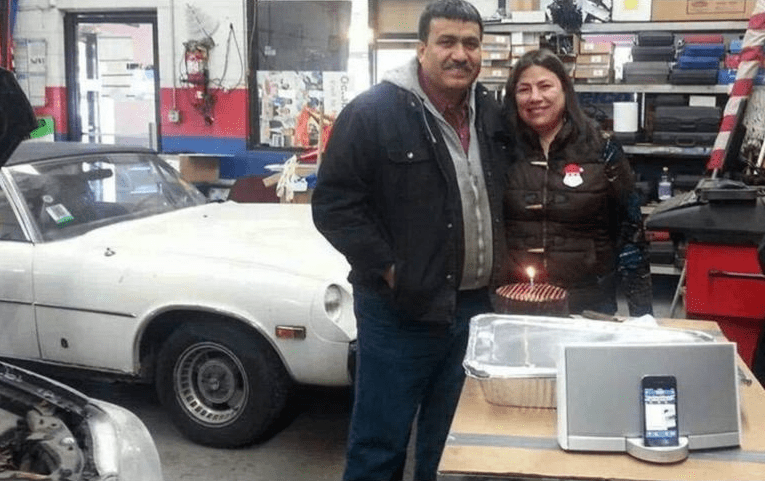 Life is like a car engine: if the parts are not properly assembled, it is difficult to get anywhere. Vicente Torres understands this well , an immigrant who for 25 years has been a reference for any Mexican who has problems with his car in Chicago .

The pieces in Vicente’s life seemed to come together for a long time, when as a child, in the 1960s, he played in a mechanical workshop in his neighborhood, in Mexico City. Among engine parts, oil and tools, he already felt since he was a child that there was his place in the world.

He studied industrial electronics, but his passion is automotive mechanics, so it was easy to combine knowledge and make his way. Taking into account that most of the car models are computerized, his knowledge and constant training allowed him to grow quickly.

Even today Vicente is one of the few Latino mechanics with university technical training, who even with his more than 30 years of experience, participates in at least two or three seminars and courses with industry experts annually. Technology keeps changing and he knows he has to be on the cutting edge. Because it is not just about understanding how a car’s engine or electrical system works, but also about learning about each update of equipment and tools that a workshop needs, in order to offer a better service to its customers.

Thanks to the invaluable support of his wife Yolanda (originally from Mezquitic , Jalisco, whom he met in Chicago), seven years after working for others, Vicente Torres fulfilled his dream of opening his own business. Since January 1996, Tecnicentro Automotriz Inc offers the Mexican community honest and quality work, committing in writing to each client to give what they promise. In this way it has managed to compete with most of the large car dealerships.

In all these years, always located in his workshop at 3017 26th Street, Vicente learned that the key to a successful workshop is having qualified personnel, the right equipment and offering the best service guarantees.

Your family is an essential part of the business. Yolanda is the one who attends to the clients and handles the administrative management. His daughter Inan is in charge of everything related to new technologies, social media management and marketing. And his son Edgar, who has already finished college, continues to train to become an expert like his father. He will be the one to continue the business.

Ease of decision making, cost savings, human resource specialization, and more effective communication. This is what Vicente learned that an efficient family business must have to compete with larger companies.

Devotee of the “Saint of Migrants”

Legend has it that a migrant who had been lost for several days in the desert between Mexico and the United States suddenly found a tall young man, with white skin and light eyes, who offered him water, helped him find the way, and even lent him a few dollars. . When he asked how he could pay the money, the stranger asked him to look for him in Santa Ana de Guadalupe, in Jalisco.

Years later, the young man traveled to Mexico to pay off his debt, but when he arrived in town he discovered that his savior had been a priest, he was assassinated in 1928 and his image was venerated in the town’s chapel.

The name of that stranger is Toribio Romo González, murdered during the Cristero War that occurred between 1928 and 1931, when the Mexican government prohibited religious worship in the country. Toribio was canonized in 2000 by Pope John Paul II.

Vicente Torres and his wife Yolanda are devotees of Santo Toribio Romo, the so-called “Saint of the Migrants” and they participate annually in the pilgrimage in his tribute that is held every year on 26th Street in the neighborhood of La Villita.

That need to combine solidarity aid and constantly continue learning led Vicente Torres to found, 10 years ago, “Together We Grow” (TWG, an acronym for the English expression that means Together We Grow), which is the first business organization in Illinois. that exclusively brings together Latino auto shop owners.

His idea was as simple as it was effective: create a network in which all workshop owners benefit from sharing knowledge and also learn to grow their business, beyond technical issues related to mechanics.

TWG is the only association of Latino mechanics that has signed agreements with academic institutions, such as the University of Illinois at Chicago, which also helps them understand business administration.

Every year the market launches increasingly sophisticated auto models. The organization understands that egos should be put aside and seeks to mix the experience of the most veteran with the knowledge of young technicians updated in new technologies. “That’s the only way that customers don’t end up at a dealership and keep going to their trusted mechanic,” Vicente says.

TWG partners, on Vicente’s initiative, have had a code of ethics for years. Because, as he himself says, honesty is the most valuable piece of the business.

The family of Yolanda, wife of Vicente Torres, has been the connection of the businessman born in Mexico City with the Jalisco community in Chicago.

In fact, Torres was vice president of the Federation of Jaliscienses Clubs of the Midwest and president of the Club of Natives of Mezquitic (the municipality where his wife is from). The mechanic was always concerned about ensuring that the works committed through the “3×1 program” (which takes that name because, for each peso contributed by a migrant organization, an additional one was provided by each of the municipal governments) were carried out. state and federal through Sedesol).

His work earned him the recognition of former Governor Aristóteles Sandoval, who visited him in his workshop in Chicago during a work tour he did in this city in May 2016.

Americans and British redeploy troops to Afghanistan to evacuate their nationals

Fauci: Another Rise In Covid-19 Can Be Prevented