It has as many secrets as ‘Pretty Little Liars’, interrogations like those of ‘Big Little Lies and the typical high school plot of ‘Mean Girls, where popularity and envy have the same prominence as lined folders and lockers. And yet, despite the marked influence they exert on ‘Cruel Summer’, its eight episodes are sustained as an entity of its own that threatens to turn the summer asset of Amazon Prime Video into a new generational benchmark. Suitable, yes, for young people and adults, like Pixar movies.

Based on the fertile niche of adolescence and crime, universes as exploited as profitable among the youth market, ‘Cruel Summer’ has greater psychological depth than, a priori, could seem a somewhat hackneyed plot. There are lies, secrets and the same story told, in each chapter, from a different point of view. Kate Wallis, a popular teenager, (Olivia Holt) disappears in a small town in Texas, while another girl, Jeanette (Chiara Aurelia), with no apparent relationship with her, goes from being a sweet and shy girl to the most popular girl in town. to finally become America’s most hated person Twists than even the most devious thriller, and they all fit together. 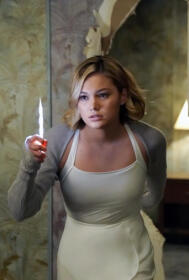 Its formula, repeated ad nauseam in countless series, appears here revitalized thanks to the original narrative , which structures each episode in three different years, the summers of 1993, 1994 and 1995. The disappearance, like the murder in ‘The White Lotus’ (HBO Spain), serves as an excuse to analyze the psychology of some characters that are never what they seem; Like the truth, it depends on perspective and focus.

“It was important for us to say, hey, younger people have very serious stories to tell. This is an intense psychological drama, clad in a touch of darkness, that is never perceived as light and yet it keeps you completely hooked, ”explains Jessica Biel , executive producer of the series, which premieres today on Amazon.

The actress, a popular Hollywood star, is the visible head of a team where women have a lot of weight, who star in and produce this addictive story, like Tia Napolitano, hardened under the feminist protection of Shonda Rhimes in ‘Grey’s Anatomy’ . “We have achieved a medium in which you can not only act, but also have a company, create stories and content. Television has given women a platform to play these roles – whatever you want to do, you can do it now. From my own experience, I think that women want to take charge of their careers, go after their goals and not just wait for a call that may never come, “tells ABC Biel, who has already worked as a producer (and also of the protagonist) in ‘The sinner’.

For the interpreter, this turn of the wheel, which is also beginning to be a trend thanks to the step forward of professional colleagues such as Reese Witherspoon or Nichole Kidman, «changes your experience as an actor, because it allows you to have more control over your career. It’s very exciting”. Like the plot of ‘Cruel Summer’ .

I am "Joem". Owner and editor at globemediawire.com An Idealist that produces different types of news and information online.

How Many times has Kanye West spoke about running for President?